A new Australian product on the cutting edge of scientific innovation could become a billion-dollar game-changer on a global scale for agriculture, by eliminating the losses graziers’ face from intestinal parasites. 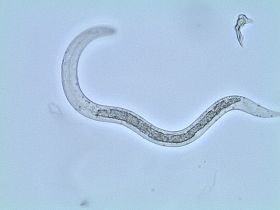 BioWorma is a biological worm control product which saves graziers time and money, both through limiting stock losses and also reducing the need for chemical drenches for cattle, sheep, goats, pigs and horses.

BioWorma uses a natural strain of fungus – Duddingtonia flagrans – which seeks out and traps the larvae of parasites such as Barber’s Pole Worms, Brown Stomach Worms, Black Scour Worms and Thread Worms. It acts by substantially reducing the numbers of infective worm larvae (including multi-resistant larvae) emerging from manure onto pasture. When fed to animals, the thick-walled spores remain inert (having no effect within the host animal) and resist digestion, passing through into the manure. There they germinate and form trapping organs that capture, paralyse and consume emerging infective worm larvae (including multi-resistant larvae). The spores are safe, non-toxic and residue-free.

“It is using nature to fight nature, rather than chemicals to fight nature,” said Chris Lawlor, head of International Animal Health Products. BioWorma is the result of over 20 years of painstaking scientific study and innovation, creating a product that is the first of its kind, anywhere in the world. Drenches currently used to fight intestinal parasites will be supported by BioWorma in reducing re-infestation onto pasture, Mr Lawlor said BioWorma was in a class of its own.

Mr Lawlor was first contacted about developing a fungal product to combat worms all the way back in 1997 by the CSIRO. The idea immediately appealed to him as an opportunity for Australian agriculture to be ahead of the curve.

“Globally, the losses from parasites would be a billion dollars or more… so I didn’t want to see this get developed overseas and then see Australian farmers having to buy it back.”

“It was something that had never been done before, so there was no rule book.”

The next two decades involved 19 trials and three different safety studies, testing for everything from environmental effects, toxicology and residues through to the simple questions of how to harvest thousands of tonnes of Duddingtonia flagrans spores, how to feed it to the livestock in a known dosage to then test the manure for the number of larvae remaining.

Mr Lawlor said there was rigorous testing to make sure the product was safe for farmers to handle, as well as safe for the livestock, the environment and even for earthworms and dung beetles in the soil.

Given that BioWorma works through interrupting the crucial re-infestation stage of the parasites’ life cycle and reducing the amount of re-infection from contaminated pasture, Mr Lawlor said it works best when the livestock are moved onto fresh pasture.

“The product works particularly well within a rotational grazing system.”

BioWorma is about to be approved for sale in Australia and New Zealand, and Mr Lawlor said it will be available in the United States shortly and Europe within the next year or two.